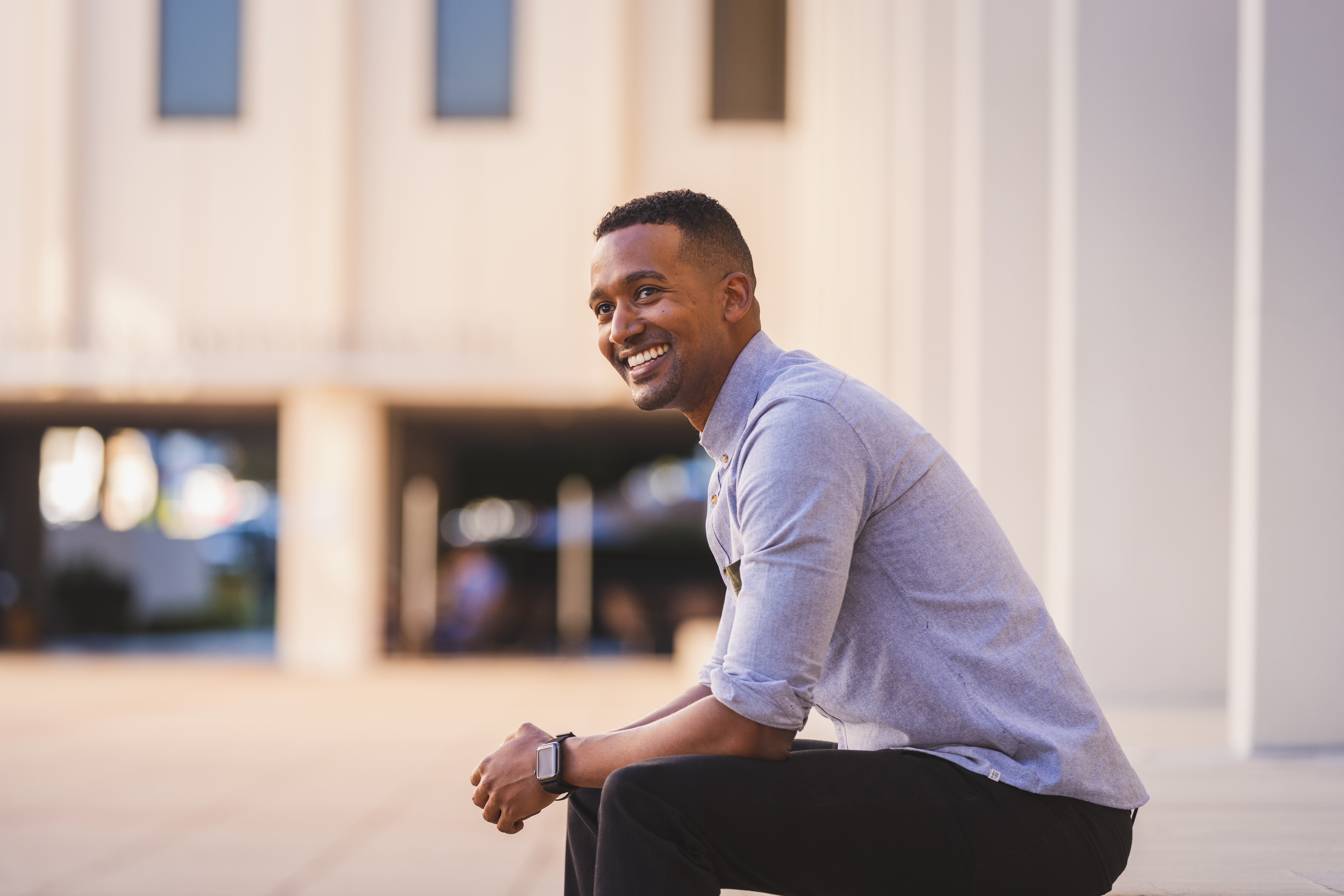 For many, Tad Worku is already a familiar face on the Loma Linda University campus; whether it be from the active role he has played as a nurse in the emergency department or his musical talents being shared in the occasional concert or community event. But the various chapters of his story that detail his arrival in Loma Linda, his transition into teaching at Loma Linda University School of Nursing and his continued ministry of music may be less storied.

A first generation Ethiopian-American, born and raised in Northern California, Worku cites his parents’ journey of faith, education, and immigration from rural Ethiopia to the United States as one that set the foundation for his own story. “When I looked at their story, I really saw something impossible and it made me feel like I was free to figure out my own purpose.”

Tad originally went to college for business and marketing with the intention of pursuing a career as a pop/soul musician. After graduating, he spent several years honing his craft, recording music, and preparing to launch a national tour and ultimately his music career. “I wanted to travel the world and sell out shows. At that point, I would have never considered becoming a nurse.” Ultimately a personal lack of peace in his journey led Worku to step away from music in search of his calling. “I wanted something that connected my hands directly to the purpose. The door that opened was nursing.”

With the peace that God was leading him down the right path, Tad went back to nursing school to complete his BSN and begin his career which would eventually lead him to Loma Linda University Medical Center. After several years of working in the Emergency Department at LLUMC, Tad found himself with new emerging opportunities in music, including the chance to record his debut album and finally go on tour, all while still working as a nurse. When the coronavirus pandemic sidelined these plans, Tad once was faced with the question of what God wanted him to do next. “After 6 years in the ER I was ready for a change. I always loved teaching in the ER; staff education and precepting of students, so I decided to try clinical instructing while still working in the hospital.” Tad took to instructing so well, he left the ER and began teaching full time a few months later.

Starting a teaching career in the middle of a pandemic wasn’t a simple transition. But with a circle of mentorship and guidance around him, Tad was able to not only able to find a place of comfort in the diverse faculty at LLUSN, he was able to extend that support to his students in new and innovative ways; overcoming the challenge of distance learning in the process. “Nursing school is so busy and full of information that has to be learned. Its easy to forget we are working with human beings, not disease processes.” He continues, “That philosophy has been foundational to my experience as a nurse [and now a teacher]. The information is necessary to thrive in healthcare, but it’s the human connection that makes it a meaningful environment."

A meaningful theme that has followed Tad from the emergency room to the classroom has been resilience. He reflects on this, saying, “The pandemic has challenged us in ways we never could have imagined. [The nurses I worked with] are some of the strongest people I have met. The fact that you wake up multiple times a week and go back into the fire is something that takes a special person.” Amidst this journey, Tad found solace in his music to process the challenges of the pandemic, saying, “Music contributed to my resilience and I wrote quite a few songs processing my experiences in 2020.” Tad continues, adding, “I also had the opportunity to start a well-being initiative with coworkers in the ER, which I eventually brought to LLUSN.” This well-being initiative, known appropriately as Well-Being Wednesdays, was launched at the school in the Spring of 2021 and quickly became a cornerstone in the quality of life for many within the LLUSN student and faculty body, pursuing a sea-change of attitude and outlook. “I had a realization that to be truly successful in life, well-being would need to be at the foundation of everything. So much of life seems to encourage chasing an unattainable goal of status, wealth, position, or power.”

When Tad arrived at the school he knew he wanted to invest in creating a well-being initiative for students. It was a live speaker series, hosted over the Zoom platform like a digital fireside chat with various guests discussing topics directly related to personal and professional well-being. “During nursing school, students develop so many skills in order to care for others, and yet, I think they are unprepared for the realities of the hospital. It’s crucial to invest in well-being just as much as critical thinking.”

Well-Being Wednesdays now sees a regular virtual attendance averaging anywhere from 50 to 100 participants and Tad plans to continue making the content more relevant and accessible to its audience including the development of a companion podcast. And while music is still a big part of his life (his debut album was finally released earlier this year), his career in both nursing and teaching has taught Tad that sharing his outlook and perspective can have just as fulfilling an impact as sharing his song. “I love that nursing is broad enough to grow and change as I continue to pursue purpose and calling. Each step in my journey has contributed to the bigger story and that has been the most fulfilling part for me.”